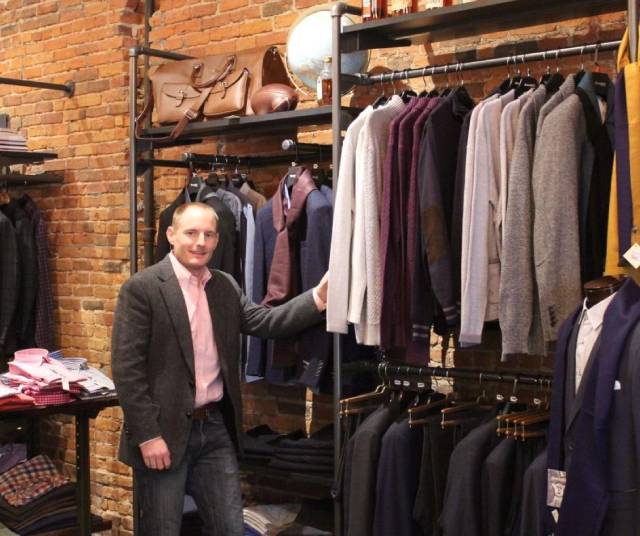 A gentlemen’s boutique in downtown Valparaiso is looking to be able to serve whisky at charitable events as it adapts to a changing retail landscape.

Rusted Oak, a clothier at 19 Lincolnway, has received initial approval from the Indiana Alcohol and Tobacco Commission, to get a fraternal club liquor license that would let it offer whisky and other alcoholic drinks after after-hours fundraisers for local charities. Other stores such as Albert’s Diamond Jewelers have staged events like whisky tastings and casino nights to lure in millennials, who marketers view as valuing experiences over possessions because of the popularity of social media sharing.

It’s one of a few changes the upscale menswear store in downtown Valparaiso is making at a time when retail giants like Macy’s are closing scores of brick-and-mortar locations and dress codes are getting loosened in workplaces nationwide.

Rusted Oak specializes in custom suits and shoes, and tuxedo rentals for black tie events, but is broadening its offerings to include “athleisure” wear like golf clothes to cater to changing tastes.

“Younger people are more into fitness and exercising a lot,” he said. “They have unique muscular bodies. They’re doing Crossfit. We’re going back to the custom clothing we had 100 years ago. Customization allows the individual person to be better dressed for their lifestyle.”

Fifty years ago, most men in Northwest Indiana might have been steelworkers, but now they defy easy categorization, Ordway said. Steelworkers might dress up on Friday nights to take their wives out on the town. Lawyers might go deer hunting on weekends, and farmers might moonlight as musicians.

Rusted Oak has worked to lure men in with a personalized shopping experience, as well as goods like beard oils, beard butter, private-label colognes and decorative whisky barrels. It also expanding to offer more women’s clothing.

“Women outspend men two to one in retail in this country,” he said. “Women buy for fun, while men buy based on need.”

Retailers as a whole have been declining, closing stores and laying off workers nationwide.

“Big box is dead,” he said. “You have to sell the experience to be modern and stay relevant. Gone are the days of stack it high and watch it fly.”

That’s why Ordway is asking the state for a liquor license similar to those the Elks and Oddfellows have so the boutique could have whisky tastings at private events to benefit local charities. Attendees to the in-store gales would buy tickets that would make them part of a private club, satisfying the state’s fraternal club requirement.

“Clothing can be purchased online, so you have to sell the experience as paramount to consumption,” he said. “A whisky bar or barber drives foot traffic. It’s a highly competitive, mature industry with a lot of shifts. You have to adapt.”

Ordway is also looking at kicking back a portion of store purchases to local charities like Kid’s Alive International or the Gabriel Horn Homeless Shelter. Customers could play a plinko game to select one out of six nonprofits.

“I’ve seen the very bad business model where someone will spend a hundred dollars and then you ask them for one dollar for the St. Jude Foundation,” Ordway said. “The millennial generation is looking for new ways to get engaged with the community, and want to be connected with groups where they could invest their time, treasure and talent.”