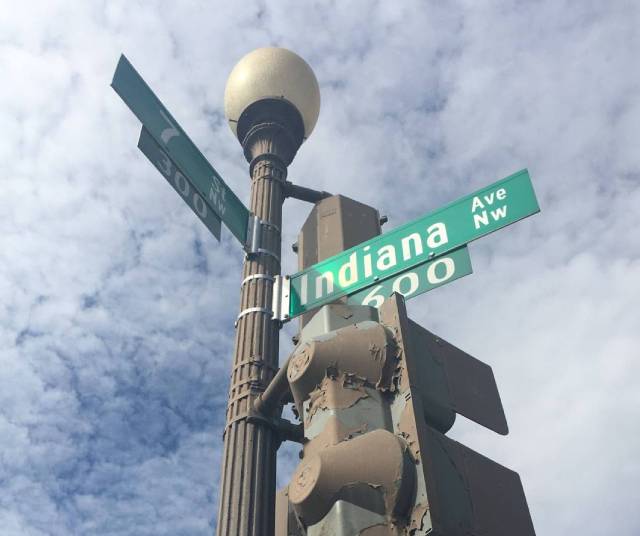 WASHINGTON – A host of Hoosiers — led by Vice President Pence — have come to the nation’s capital in the past year to make their mark in the corridors of power.

And now Hoosiers are hoping to take advantage of that influx to improve an actual corridor, home to what’s been dubbed D.C.’s “ugliest statue.”

The Indiana Society of Washington, a social and networking group for expatriate Hoosiers, is taking on a half-acre section of land on Pennsylvania Avenue, midway between the White House and the Capitol, in hopes of making it more worthy of the name it was given nearly three decades ago: Indiana Plaza

“It bears our name, and we want to be proud of it,” said Jan Powell, a longtime Indiana Society board member.

On Monday, the group is raising the first round of money for the improvement project in a tribute dinner to Pence and his wife, both backers of the society.

It’s one of the ways the group is taking advantage of the higher profile that comes with being the home state of the vice president.

“It does make a difference for sure,” said treasurer Dave Zook, who was also involved in the society when Dan Quayle was vice president.

More than 1,100 Hoosiers are part of the organization, a significant bump from a few years ago.Get the Hoosier Politics newsletter in your inbox.

Members include those who have been in Washington for a while, as well as newcomers like Robert Ordway.

“The organization has been great on how to really plug people in,” said Ordway, who moved to Washington for the new opportunities he saw with the change of administration. “If you want to work on the Hill, or in the administration, or in lobbying, it’s about having friends here.”

Dozens of Hoosiers — or those who have worked in Indiana politics, businesses or for elected officials — are now working throughout the Trump administration. 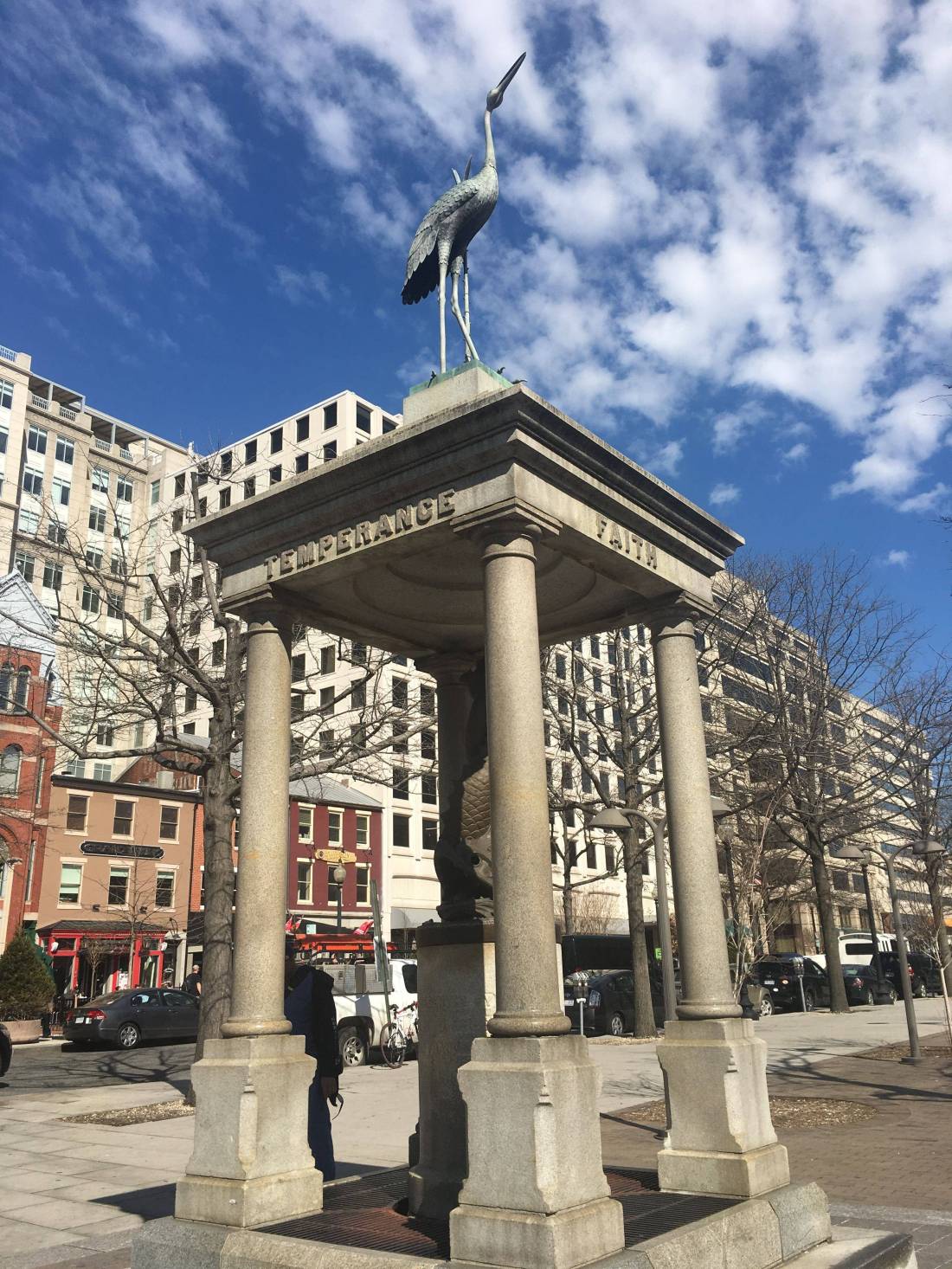 Some in top jobs — including Health and Human Services Secretary Alex Azar, Surgeon General Jerome Adams and Centers for Medicare and Medicaid Services Administrator Seema Verma — are expected to attend Monday’s tribute to the Pences at the National Museum of Women and the Arts.

“There’s a real awareness of the extent to which the vice president has been bringing folks to Washington to serve in the administration,” Zook said. “And that tends to add to the profile and awareness of Indiana.”

When Ordway, who works for the conservative American Legislative Exchange Council, tells people he’s from Indiana, they immediately mention Pence.

The other common response he gets is: “Oh. You’re from the Midwest. You’re really nice.”

“There’s an element of pride of being from Indiana,” Ordway said. “We’re just more amicable, friendly. We can be partisan, but it’s just different than the East Coast. I think people really relish being around those cultural values.”

The Indiana Society, one of the oldest state societies in Washington, gives Hoosiers a chance to appreciate those values at the inaugural ball it holds every four years, at happy hours featuring suds from Indiana’s craft breweries, and at events celebrating the Indy 500 and the anniversary of Indiana become a state.

Indiana Avenue is one of the streets that borders Indiana Plaza in Washington, D.C.

The group also organized the ceremony — with Vice President Quayle cutting the ceremonial gold ribbon — when Indiana Plaza was dedicated in 1990.

The plaza was created during the revitalization of a decaying Pennsylvania Avenue, the thoroughfare that runs from the White House to the Capitol and is known as “America’s Main Street.”

While every state in the nation has a street in Washington named after it, they don’t all have a plaza.

“We have some sense of responsibility,” said Indiana Society president Stefan Bailey, an Indianapolis native. “It’s natural for us to be committed to its upkeep.”

The plaza may be best known for its monument to the temperance movement, a structure the Washington Post has said is “widely celebrated as Washington’s ugliest statue.” The Washington City Paper called it an “excellent Washington conversation piece too quaint to dispose of.”

The Temperance Fountain, located in Washington, D.C.’s Indiana Plaza, has been called the city’s ugliest monument.

The miniature Greek temple is one of 16 fountains donated to cities across the country in the 19th century by a wealthy California dentist who thought people would switch from beer to water if given a clean source.

(The Architect of the Capitol notes that while the fountain didn’t do much to decrease alcohol consumption in Washington, it did have the unintended impact of spurring the creation of fine arts commissions around the country to weed out “similar unwanted `gifts.’”) 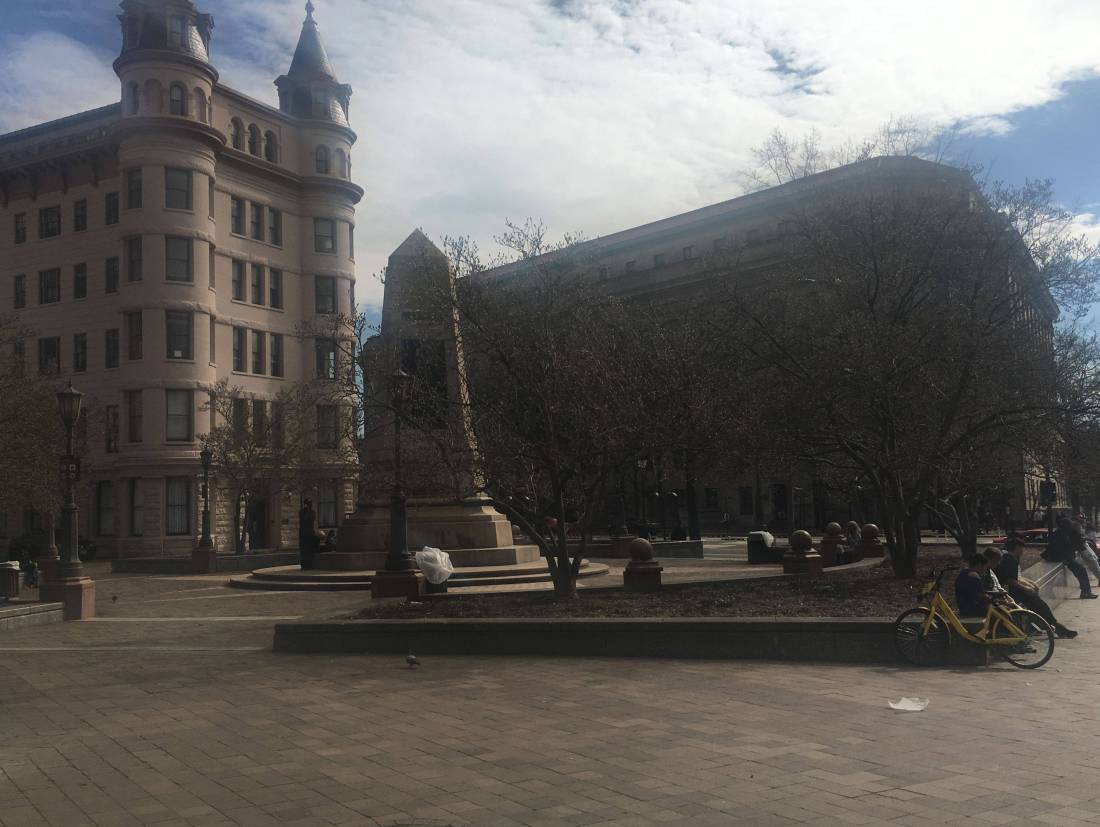 Asked if the Indiana Society has any plans for the monument, Bailey judiciously responded: “That’s a decision for others.”

The site’s other main feature is 25-foot tall Civil War monument dedicated to the Grand Army of the Republic, a fraternal organization for Union veterans.

The Indiana Society is working with the National Park Service, which oversees the property, along with the city’s business improvement group on ways to make the area more inviting.

Indiana Plaza, a half-acre section of land halfway between the White House and the Capitol in Washington, D.C. )

“it’s not a place where people linger, sit down, have a cup of coffee,” Powell said. “It’s kind of a walk-through place.”

Initial plans include some cosmetic changes, such as tables and chairs, to spruce up the space and make it more vibrant.  While those changes could be made in time for the spring influx of tourists to Washington, the group is also exploring bigger ways to improve the plaza’s physical condition, as well as ways to tell Indiana’s story.

While visiting Hoosiers shouldn’t expect to see a racecar or basketball hoop on the plaza, the group hopes it will become a destination spot for Indiana tourists. It could also be as much of a point of pride as are the many national landmarks, museums, private and public buildings built with Indiana limestone that are throughout the nation’s capital, including around Indiana Plaza.

“I think we’re finally now in a position to make a long-term contribution to the plaza,” Bailey said, “and by extension, to D.C.”