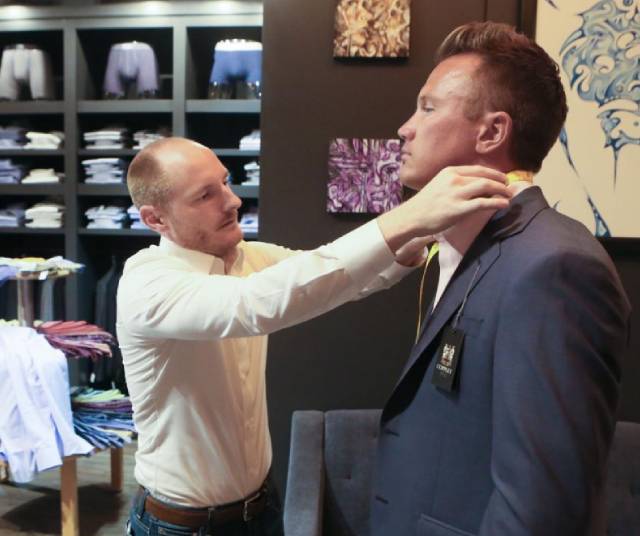 Being somewhat of a night owl, I try to schedule interviews at the crack of noon. But my chat with Robert Ordway began before his store — Rusted Oak — opened for business. I could have used a shave and became all the more self-conscious when I realized that I’d spilled some jambalaya on my blue jeans from the night before. To make matters worse, as I pulled into the lot on Valparaiso’s square I noted that my black coat was coated with globs of snow white hair from my girlfriend’s one-eared cat.

Ordway, 30, is a haberdasher and quite the clothes horse.

Were you born and raised in Valpo?

“No, I grew up in Lake Station,” he said. “I graduated from River Forest High School.”

The River Forest Ingots. Only in Northwest Indiana. College?

“I was the first one in my family to go to college. I was an Eli Lilly Endowment Scholar which is a full ride to anywhere in the state of Indiana. I went to Purdue for a year and then my dad passed away from Lou Gehrig’s disease. That fall, I transferred to Valparaiso University. I graduated with a (bachelor of science in business administration) degree.

What did you do?

“I went back to grad school in January of 2009 at Valparaiso University for international commerce and policy. On my third day of grad school, my mother took her own life. It made for a challenging year-and-a-half to get through grad school. But I finished with like a 3.89 (grade point average); I only had one B-plus. It was a good program and I learned a lot.

“In 2009, I interned for Mayor John Costas. In the spring of 2010, I interned for state representative Ed Soliday in Indianapolis. Once I was done with that, they needed people on the ground to run political campaigns, so I worked for the Republican House Campaign Committee and worked on Dan Klein’s campaign in Crown Point.”

This is good. I’m knocking out my annual Republican interview and it’s only January. Tell me about your people.

“Most of the Ordways migrated to Indiana from Western Kentucky, particularly when the mineral mines were depleting in the early 20th Century. My family came from Crittenden County to Gary during the1950s to get jobs at U.S. Steel.”

People from all over the world came to this area to land jobs in the steel mills.

“Unlike the rest of the state, which is mostly white Anglo-Saxon Protestant, this is by far the most diverse as far as ethnic backgrounds. You don’t hear about Pierogi Fest or Serb Fest in Indianapolis.”

Don’t get me started. I just went off on a professor emeritus from IU Bloomington the other day. I didn’t like the way he talked down to me regarding one of my columns. He told me I needed to buy his book and that it was available at Hoosier Press. Those are the folks who rejected my attempt of publishing a book about the people of Northwest Indiana. (Screw) them. I self-published and my book is selling like hot cakes.

“It’s because your book is unique. It’s not just about corporate blah, blah, blah. We live in a society that’s more individualistic, so reading and listening to realistic stories instead of some fictional timeless principle, well, people want something more authentic. I’ll sell your book here at Rusted Oak.”

Let’s switch gears. When did you open this place?

“In November of last year. I’ve only been open for two months.

“January is a slow month, but December was good to us. I’ve been following the men’s clothing industry for about 10 years. I’m from a family whose dad and granddad were steel workers. Owning dress clothes didn’t exist. When my dad passed away, we buried him in my blue dress shirt because he didn’t own a dress shirt.”

“As a finance major, you start going to these career fairs and job interviews and you gotta be wearing a suit. I took an interest in it (clothing industry) in about 2005. When this situation presented itself, I thought there was a market opportunity here in Porter County.

“We don’t just sell clothing for retail’s sake, we offer advice. What do you for a living? What do you do for fun? How can we build a wardrobe that can perform across those different avenues? We have folks who may be steel workers by day, but may be golfers on the weekends. We have folks who are lawyers by day, but are deer hunters on the weekends.”

Describe some of your products.

“We definitely carry a lot of casual wear. There’s also our heavy lifting for the lawyers and doctors on a day-to-day basis in the white-collar world. We have all the suiting you can imagine. We’re also trying to hit more high school and college kids with a more youthful, preppy, clean look.”

“We removed this wall and exposed this brick which hadn’t been seen by people in 50 or 60 years. We had the original tin ceiling spray painted with metal flake copper. We want the place to be traditional, yet modern. Conservative, but progressive. We carry traditional cuff links and watches, but also handmade wooden combs out of Noblesville, Indiana. We have soap, deodorant and body wash all organically made. These cuff links here are made from steel pennies and buffalo nickels.”

Is there anything else that you’d like in your story?

“I’ve moved away twice. Once to Chicago and once to Indianapolis. I came back because I believe the opportunities here in Northwest Indiana are substantial. We have a phenomenal lake shore. Our proximity to Chicago – one of the largest economies in the world – combined with state business policies of Indiana being fairly frugal, lends us to being in an environment to recreate manufacturing jobs. Manufacturing jobs are at their lowest percentage in the history of the United States. I believe we are in a great position, whether you’re from Gary, Valparaiso, Lowell, Crown Point or Chesterton, to create a resurgence in the manufacturing industry. It just takes people in various sectors of the community to lead and work from a team approach. Those folks who do that are going to be the most successful in the long run.”

“Never be ashamed of what you do for a living and never forget where you came from.”