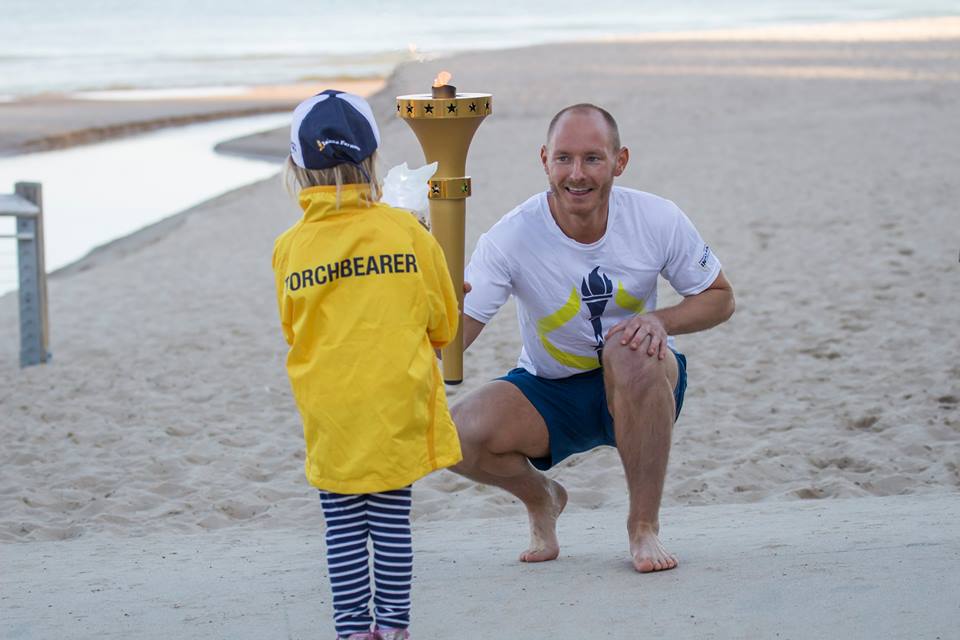 In black-and-white leggings and a yellow jacket emblazoned with “torchbearer” on the back, Marlo Colburn, 4, ran through the sand Sunday morning at Indiana Dunes State Park outside the pavilion carrying a battery-powered torch.

She met up with Robert Ordway of Valparaiso, who carried a lit torch, before he went on his way to meet up with the next torchbearer.

Marlo, of Ogden Dunes, was one of 55 Porter County participants to handle the torch as it made its way through Porter County and Lake County as part of the state’s bicentennial celebration.

“I was excited,” Marlo said after her run, giving a nod to the chilly, breezy weather. “My hands are freezing.”

The torch was to wind its way to the Dunes Visitor Center, then get driven to Valparaiso University and carried to Valparaiso’s Central Park Plaza for a celebration before it was driven again to Portage for a parade and other festivities.

The torch’s path from there on Sunday included a wide swath of Lake County, from Whiting to Hobart. The relay picks back up at 8:30 a.m. Tuesday, with a kickoff event at the Lake County Government Complex, after which the torch will meander through Crown Point before heading to Jasper County. The torch’s journey ends Saturday at the statehouse in Indianapolis.

Porter County was the 79th county to host the torch, said Mark Newman, executive director of the Indiana Office of Tourism Development. By the time the torch reached the shores of Lake Michigan, it had traveled more than 2,700 miles, and will have gone more than 3,200 miles when the relay ends after going through all 92 of the state’s counties.

“It’s a fabulous opportunity for us to showcase the beauty of our state,” he said, noting Lake Michigan behind him, where a boat’s sails fluttered in the breeze just offshore. “I refer to it as the greatest lake, and you have one of the most beautiful settings in Indiana, if not the most beautiful in the United States.”

Many people use the word “surprising” when describing what they find in Porter County, said Lorelei Weimer, executive director of Indiana Dunes Tourism.

“They are quickly surprised by our diverse landscape,” she said, noting the dunes, the state park and Indiana Dunes National Lakeshore, the county’s steel heritage, Valparaiso University, its 11 cities and towns, and the Kankakee River. “And those are just some of the things that make our county special.”

Before the relay began, participants and their supporters had the chance to make commemorative pennies and walk through the Bicentennial Experience mobile unit, which offered information on the state’s history and accomplishments over the last 200 years.

The Bicentennial Experience mobile unit will be on display from 9a.m. to 1 p.m. Tuesday at County Line Orchard, 200 S. County Line Road, Hobart, and is free and open to the public.

Organizers said each torchbearer was nominated by people in the community and selected because of the difference they’ve made for those around them and beyond.

Other torchbearers along the Porter County route included Bill Pauley of Valparaiso, who worked to put 911 signs up on trails throughout parks in the county after a friend of his died of a massive heart attack while running the trails at the state park; and Robert Patterson, father of Christopher Patterson, a Valparaiso University student who died in Afghanistan in 2012 while serving with the Indiana Army National Guard.

“It’s due time you were recognized for your contributions,” Newman said, adding 2,045 people across the state were selected to carry the torch. He encouraged the torchbearers to pass their community spirit on to future generations.

For Marlo, who organizers said was the youngest torchbearer so far since the relay began Sept. 9 in Corydon, the state’s first capital, that good deed was collecting 22 pounds of Play-Doh for a children’s hospital in Indianapolis.

“I suggested it to her, knowing Riley’s Children’s Hospital was in need of Play-Doh for kids to play with,” said Marlo’s mom, Erin Woloshansky, adding Marlo’s classmates brought “substantial amounts” of the molding clay to her daughter’s birthday party.

Woloshansky said she and Marlo watched the training videos before the relay so she would know now to handle her torch. While Marlo enjoyed the experience, she admitted she couldn’t shake the morning’s chill.

“I wanted to run inside,” she said.

Amy Lavalley is a freelance reporter for the Post-Tribune.