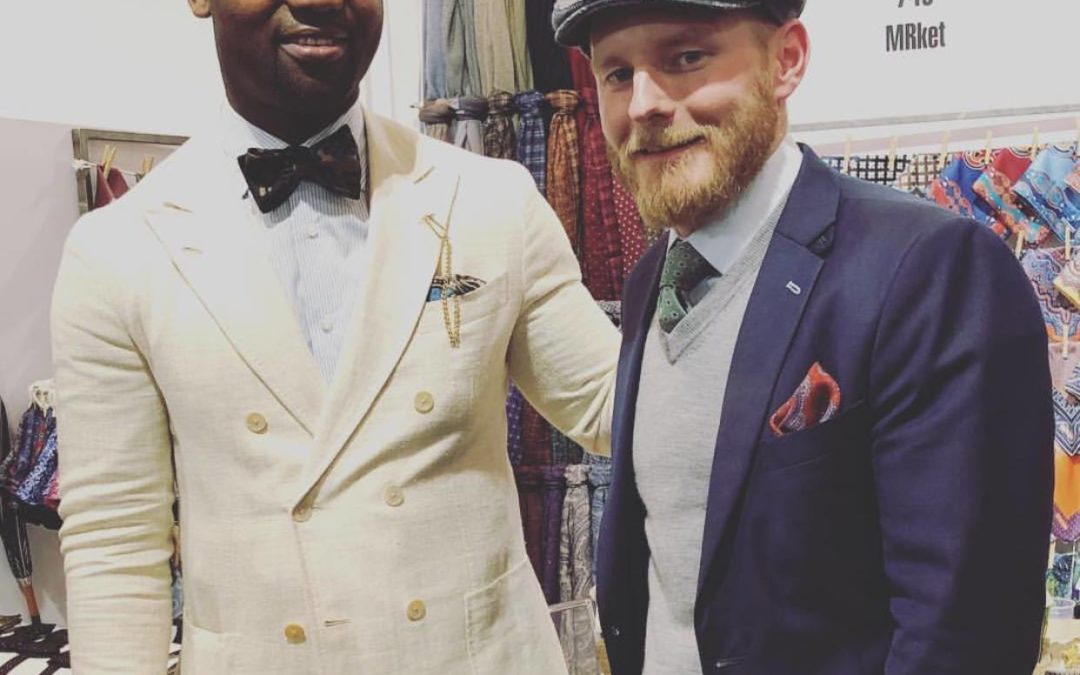 Is a former menswear retailer, I still enjoy attending the shows so I can stay connected to the industry and keep my finger on the pulse of brands and wholesalers. This past January 21-22, I had the opportunity to attend three different shows in a 48-hour trip. Living in DC is great because it’s a transportation hub of sorts. I took the 5:25 am Amtrak from Union Station to downtown Manhattan and arrived 3.5 hours later at Penn Station.

Despite the recent Amtrak issues with derailing, the ride was smooth and the free WiFi allowed me to get some research done before my arrival.

The menswear industry has been outpacing women’s in percentage growth since 2009, however, the growth has been through online sales as well as pop up shops. This has left the trade shows with some brands that are now struggling and a few vendors completely absent. My first trade show was the NYC MRKET but it has recently been combined with the Project Show and both now fly under the UBM Fashion branding.

After arriving in NYC, I got lazy and took an Uber over the to the Javits Center. I have to give it to UBM, the show was by far the best one I have been to since my involvement in the industry. The check-in was extremely smooth and painless and I was able to store my Hook+Albert ‘Weekender’ bag with staff while I made my rounds.

This year, UBM did a lot of homework ahead of time. Before the show, one could go online and see the floor plan and vendors along with their contact information. While the floor layout had always incorporated sections for Italian made goods, ‘Brits in New York’ and Modern Prep. Project Show was merged with MRKET Show in the summer of 2016 and it essentially brought modern contemporary clothing and traditional dress wear under one roof. For brands deemed ‘makers’, they had a new section called The Foundry.

I would be remiss if I didn’t stop by the booth of Edward Armah, the bow-tie king. Eddie started at Neiman Marcus and now runs his own line of pocket squares, bow-ties and lapel flowers. He’s expanded into ties, umbrellas, scarves along with a few leather goods as well. While he is based in New Jersey, he has no presence in the DC area and I think that is something we need to change. I picked up a handful of his reversible pocket rounds and a lapel flower.

It was neat to reconnect with Marcus Troy, the gent that leads #ProjectBlogger. His crew bring a different flavour to the show with their modern and contemporary dress which I think is well noticed amongst the crowd.

As I walked up and down the aisles while looking at my handouts, it was interesting to see some new brands in the room as well as some of the mainstays that were missing. I have heard this show is pretty expensive to present at so over the past few years, brands like Peter Millar and Coppley reserve space at the Park Lane Hotel. Other smaller brands that can’t afford the Javits Center rent have followed suit but I did not have the time to make it over there.

I stayed at the Javits Center from about 9 am to 3 pm then headed up north to The London Hotel to catch up with the Custom Tailor and Designers Association (CTDA). Twice a year, they put on a custom clothing trade show that takes up two floors at the hotel. Vendors include fabric mills, cut-make-trim (CMT) shops as well as shoe, tie and other unique goods manufacturers. Back in 2015, I received my custom clothier certification after taking a handful of classes taught by professionals who have been in the business for many years. While on a website a month back, I saw that for the first time ever, they were offering a complimentary class on fabrics by Luke Mayes from Dormeuil. I decided to take them up on the offer and learned a lot in the process. Luke was very helpful in answering questions, especially regarding stretch fabric and man-made fibres along with their impact on the wool industry. I was also able to reconnect with DC native, energy lobbyist and fashion designer, James Williams from A Stylish Way of Life. He offers handmade bespoke pocket squares but is now moving into ties and other accessories. After the lass, I briefly showed up to the CTDA after-party before my guest arrived. We had a cocktail there at the Red Eye Grille before heading back up to his place in Hamilton Heights. That was my first time riding the NYC subway and it was quite different than the DC Metro: far dirtier but actually functional and on time!

Monday morning started early as my buddy had to headto work but he introduced me to one of his favourite local coffee shops called The Chipped Cup. Afterward, we jumped back on the subway then went our separate ways as I was back to the Javits Center for round two. This time, however, I started my day off with a different trade show. TEXWorldUSA and Apparel Sourcing USA run as a side-by-side show in textiles and finished goods which can be private-labelled. One thing that was different than the menswear show is the number of seminars and educational events. I only had the time to attend one so I went to “Fashion 101: How to Start Your Own Fashion Line”. The room sat about 150 but more than 250 jammed in there to hear a presentation from Mercedes Gonzalez of the Global Purchasing Group. She was very direct and told the crowd not to overthink the industry. People are not your friends and other companies will try to copy your stuff soon as it comes out. Private labelling is not the way for designers and expect for your first sample to come in wrong. Don’t cry and explain to the manufacturer what needs to be changed. Lastly, don’t develop a business plan because they don’t matter. The key is selling it to stores and getting them on board.

After the class, I went up and down each aisle just to see the whole show. Most of the manufacturers were from China and the minimums were very high. One underwear manufacturer has a 3000 piece minimum but the cost was broken down to $1.50 each. I came across a booth that was unlike any other, called Fashion Mingle. Their goal is to connect people in the industry, whether they are designers, manufacturers, wholesale or retailers. The booth right next to them was called Fashion DEX and just as helpful. A few years back, they started writing manuals, indexes and other books to help people learn how to design, market and ultimate retailer clothing.

I had the privilege of meeting with the team from CTD, a Chinese manufacturer of suits that many clothiers are using these days. Their team presented me with a gift which was very generous. They had to be on the sourcing side of the show instead of the menswear retailers because they are not domiciled in the U.S.

I would say one of my favourite parts of the show was learning where everything is made. Brand’s like Kirkland, which was created by Costco along with Tommy Hilfiger, Guess, Boss, Calvin Klein along with a host of other designer brands. Manufacturing is going to change as Alibaba connects small-time creators with manufacturers that are will to do low minimums.

After the show, I had a dinner with one of my former sales reps, Les Hale then hopped back on the Amtrak back to DC. Les lives in Chicago and represents Trands USAis the custom suit world but also reps Dapper Classics and During my long ride home, it gave me a lot of time to better understand how all the pieces fit together in this industry. Politically, NAFTA and TPP along with trade restrictions and tariffs will play a part in the future of retail. In the 1960s, the US made about 95% of itsclothing but now it is about 3% today. Based on the labour rates around the world, it is highly unlikely that manufacturing will return to the US. Most of the tailors in the US are also ageing and younger people are not taking up the trade. While retail has been around for the past 100 years, we are actually moving back to custom clothing in the way of suits, shirts, shoes and the like, however, it won’t be garments that are made by one individual. Instead, the components are broken out, much like in the manufacturing the Ford Model T, an assembly line where each person performs a single process but no individual has the knowledge or tooling to build the whole thing.Flash manufacturing will also be the future with lower runs for custom homegrown brands. Young people in America are saddled with debt so clothing as a form of splurging will decline and people will also become more socially conscious as to where their clothing is made from an ethical perspective. Millennials are also much pickier than previous generation and demand that their clothes are much more fitted. The only way to be able to accommodate all of the body types without creating so many sizes is to include stretch in the fabric. While it has been in womenswear for years, it is picking up speed very quickly in the menswear arena. The next few years will be interesting, not only in the US but around the world as the expectations and tastes change for the consumer. There will be many companies that will figure it out and become successful but that will not be without several more bankruptcies as the larger companies have not had to change for years and also given their large structure, prevent them from moving quickly on a new idea.